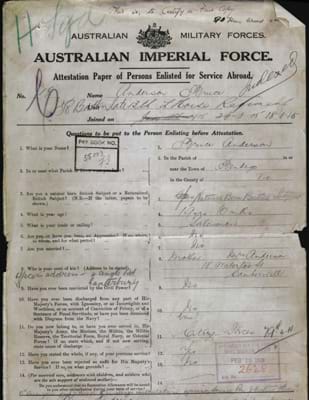 Born in Bendigo in 1895 Bruce was working as a salesman in Melbourne when he enlisted with Regimental No 18 in the 13 Light Horse in Jan 1915. Like many young men he had served in the CMF with the 79 Light Horse Regiment in Bendigo.

The 13 Shipped out to Egypt and before long Bruce was promoted to Sergeant. After Service on Gallipoli, it was back to Egypt and a transfer to the Western Front and a promotion as the Intelligence Officer for the 58 Battalion. This work often being right up on the front-line surveying enemy positions. He was mentioned in Dispatches in April 1917. He was wounded 3 times.

Shot in the thigh at Bullecourt in May, blown up suffering deafness in August, and shot through the leg and foot at Ypres in October. His work was recognised with a Military Cross awarded in July 1917. The 3 wounding put him out of the war and he was returned to Australia and discharged in June 1918.

He returned to his job as a salesman, but reenlisted and served in the Volunteer Defence Force during WW2.