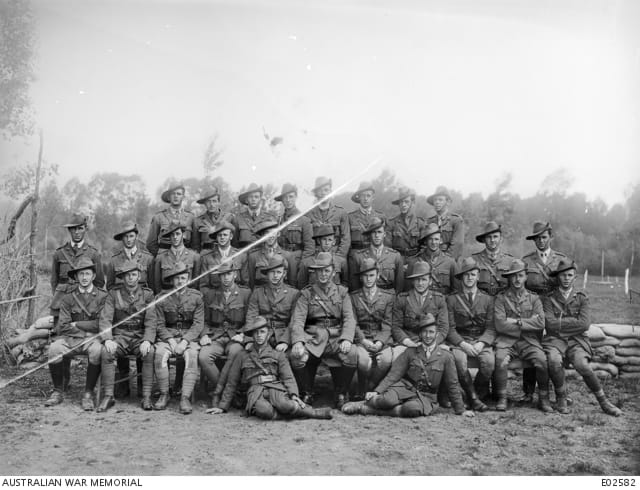 It is not uncommon when going through club records to find 2 brothers who served or even occasionally a father and son it is more unusual when we find 4 surviving members of the same family. Indeed, when checking the records of the National archives under the server name Fethers, there are 20 or so members of the extended family who served not only in World War I, but also in World War II alongside their sons and daughters.

Cyril, whose family lived in Glenhuntly Road Elsternwick served with distinction in World War I and was awarded the Military Cross for his actions. Another brother Wilfred Fethers received a DSO and was mentioned in dispatches for his services. Their brother Bernard was a qualified medical practitioner who also enlisted and worked as a doctor in London and in field hospitals in Europe. Younger brother Jeffrey served in the veterinary Corps in Europe. Older brother Wilfred was wounded several times during his service in Europe and was issued with DSO and had a mentioned in dispatches as part of his services.

Other Cousins who served were:

Erle Finlayson Denton Fethers, of East Malvern, Victoria, he received his first commission in the Victorian Scottish Regiment in 1906 as a Second Lieutenant. He was appointed Lieutenant in November 1907 and then promoted to Captain in January 1912. He was military adjutant from 1908 to 1910. He served with the 48th Infantry, Citizens' Military Forces (CMF), until his enlistment on 25 August 1914. Captain Fethers embarked from Melbourne aboard HMAT Orvieto on 21 October 1914, with A Company, 5th Battalion. He was promoted to Major on 1 January 1915. He was killed in action on 25 April 1915 on the Gallipoli Peninsula, aged 27 years.

His younger brother, 16471 James Keith Fethers, who enlisted in December 1917, and survived the war.

2nd Lieutenant Percival George Fethers who was killed in action in France on 3 May 1917.