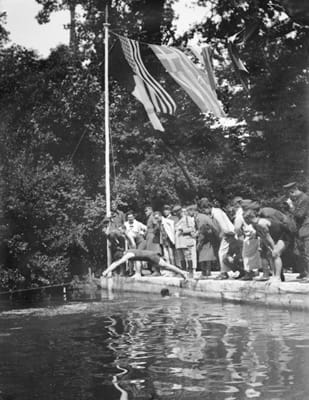 Ivan was born in Oakleigh and was educated at Brighton Grammar. As a junior, he won several State swimming titles at the Middle Park Baths, along side another future Caulfield member Frank Beaurepaire.

On 13 June 1916 he enlisted in the AIF. He joined the 5th Field Artillery Brigade on the Western Front in August 1917, but was wounded at Passchendaele, Belgium, two months later when a shell burst in his gun-pit. Following convalescence in England, he re-joined his unit in France in May 1918. For diving into the dark waters of the Hallue River on 23 June and rescuing a British soldier, he received an award from the Royal Humane Society, London.

Discharged from the A.I.F. on 4 December 1919 in Melbourne, Stedman was chosen for the 1920 Olympics at Antwerp, Belgium. He led the Australian team in the procession at the opening ceremony. With Beaurepaire, Harry Hay and William Herald, he won a silver medal in the 4 x 200-metres relay.

Having turned to long-distance swimming, he won the three-mile (4.8 km) handicap along the Yarra River in 1946 (in record time) and in 1952. With his friend Percy Cerruty, he studied ways of delaying the process of ageing.

Quick fact:  The Yarra River swim that Stedman won in 1946 and 1952 is being revived, with organisers hoping to have it up and running again in 2020.