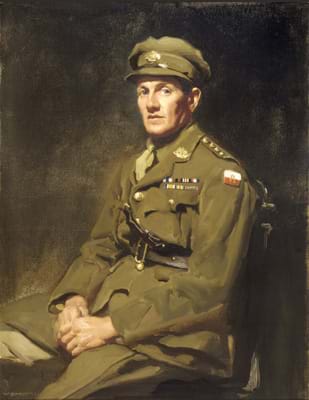 Percy Lay. D.C.M., M.M., M.C., “Croix de Guerre”. Born in Ballan, Percy enlisted and was posted to the 8th Battalion. He landed at Gallipoli on the 25th April 1915, and through his courage under duress was soon shown to be a natural leader and promoted to Sergeant. He fought near Pozieres on the Western Front and won his first decoration for his refusal to leave a wounded comrade behind in the enemy trenches after an assault upon them on 18 August 1916.

Percy was recommended for a Victoria Cross by the company commander but received a Croix de Guerre avec Palme instead. Amongst other honours on the battlefield, Lay was also awarded the Military Medal for courage on the battlefield at Bullecourt and the Distinguished Conduct Medal for leading a platoon to its final object after the wounding of his commander. For the latter honour, he was made a second lieutenant on the field. In addition, he attained the Military Cross for his taking command of an attack after the other officers had become wounded at Broodseinde near Ypres.

In February 1918 Lay was made a lieutenant and then shortly thereafter detached to Persia in 1918 for special duty (Dunster Force). He returned to Australia in March 1919 and was demobilised, establishing a farm in Alphington.

Lay’s courageous deeds weren’t restricted to World War One. He re-enlisted in WW2 as a member of the Caulfield RSL Volunteer Defence Force unit. He served with several units and finished the war as a Major.