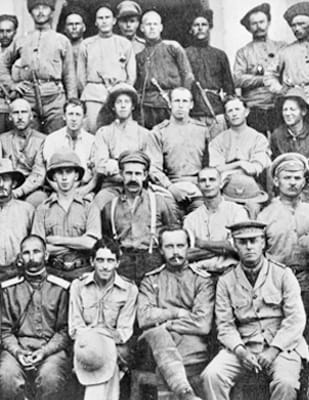 Major Samuel White; M.C., O.B.E, MID. Sam White was already a signals officer in the Australian army at the start of WW1 (pictured in the front row at Kermanshah, Persia in 1917 with members of `AA' Station, 1st Wireless Signal Squadron, and Headquarters staff of Baratov's Russian army  (1st Caucasian Division).

He transferred over to the AIF in Jan 1916, and was shipped to the middle east and spent to war fighting the Turks. For his service he was awarded the Military cross, and a Royal order of the British Empire. (OBE). His Service to the Sub-branch is best summed up in his Obituary published by the club after his Death:

MEMBERS OF THE ST. GEORGE'S Road BRANCH OF THE R.S.L. will be grieved to learn of the passing of one of the Club's original members--Major Samuel James White M.C., O.B.E., who died on Sunday July 4th. 1948. He gave a life of unstinted service to soldier’s interest, to the individual soldier, the Club, and the R.S.A.I.L.A. He was one of the founders, a past Vice president, and a Life Member of the Caulfield Sub-Branch of the R.S.L.

No member of the Club commanded the respect and regard of his fellows more than Sam White. He first joined Caulfield R.S.L. Club in 1923, giving 25 years’ service mostly as an executive officer. He was chairman of trustees of the Club Provident Fund from its inception in 1935. He was Chairman 6&7th District Board R.S.S.A.I.L.A. and State Councillor for a number of years.

In recognition of his fine service he had always given the Club, he was elected Life Member at the Club's Annual Meeting in 1938. Mr. White was cremated at Springvale Crematorium on Tuesday 6th July 1948, when over 380 people attended, among them a large sprinkling of members of Caulfield Central.

In 1942 with club membership numbers at 3200 (and a liquor licence for 680) it became obvious there wouldn’t be any room for WW2 servicemen who were beginning to be repatriated, so Sam led a committee to establish a new club called Caulfield Central. He then worked to get funding to buy a property at 169 Hawthorn road Caulfield. 100 Caulfield members then transferred to the new club, so they could get a Charter as a Sub-branch of the RSL.