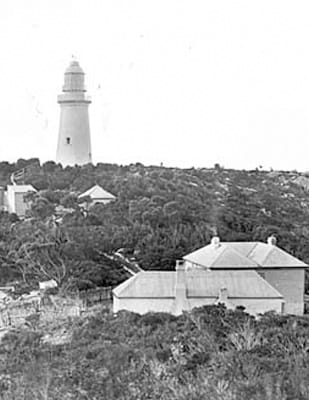 Born in Canning Town in Essex, England, Oliver George Rixon emigrated to Australia around 1913, before enlisting in the AIF in 2nd October 1917, under the name George Rixon. He served with the 59th Battalion, and was sent overseas on board the HMAT Nestor in November 1917.

He was wounded in action in August 1918 and while in England was granted leave in 1919 to 'assist with farming' at the home of H Rixon, possibly his father.

Returning to Australia on board the 'Runic' and listed as wounded, he was accompanied by his wife and child and arrived back in Australia on 6th February 1920. He is first listed on the Caulfield RSL Members list in 1938.

After returning from the war, he became a Light House keeper, first at Cape Otway and later at Deal Island, which is situated between Wilson's Prom and Flinders Island.

In Dec 1950, he was featured in the Australian Women's Weekly's Christmas edition, with the story:

As the waves pound against the rocks of little Deal Island in Bass Strait, George Rixon will eat Christmas dinner alone in his light-house. George Rixon has been a lighthouse keeper for 26 years, but this will be his first solitary Christmas celebration. Last year he and his wife shared ham, roast mutton, and plum pudding at Cape Otway light-house on the Victorian coast.

This year Mrs. Rixon is convalescing on the mainland after after tests this month in hospital. Mrs. Rixon was injured in an accident while she and her husband were driving from Apollo Bay, Victoria, to Melbourne on their way to Deal Island.

But George Rixon will not feel lonely.

The little round lighthouse is packed with warm memories for him. The Rixons lived there for five happy years when their son Billie and daughters Betty, Olive, Jean, and Audrey were children.

George's final posting was to the Gabo Island Lighthouse. He passed away in 1971, aged 76.