We think of WW1 soldiers as young men, but Roy Harbord was born on the 3 October 1897 at Moorooduc on the Mornington Peninsula, and lived with his family at Huntly St. Elsternwick. He joined the navy as a boy sailor in February 1913 aged 15. His first posting for training was aboard the HMAS Tingara. (pictured) where he completed basic training and advance training as a boy Telegraphist. Following more Training based on board the HMAS Penguin 1 in Sydney, he was old enough to be called a man, and saw service on the HMAS Cerberus. (The ship not the base) and the HMAS Australia.

Roy was among a number of Navy members at Caulfield Sub branch that saw service both before and during WW1. 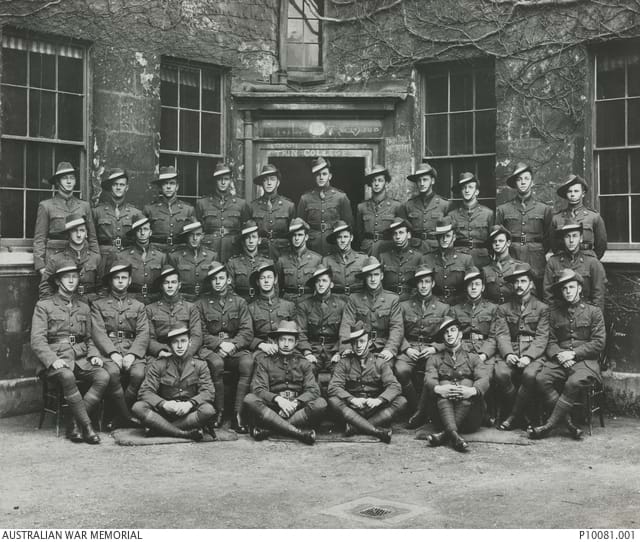 Leonard Harbord. Roy’s older brother was a postman in Elsternwick who enlisted in the AIF in August 1915. He had existing service with as a Sergeant with the C.M.F. and by March 1916 was in Egypt as a Machine Gunner with the 59 Battalion. Later in France as a Corporal, he was Mentioned in Dispatches (MID), and he was awarded a Military Medal (MM) in actions near Polygon Wood. He was commissioned as a Lieutenant in 1918.  Leonard is pictured with fellow Officer Cadets of Number 6 Battalion in front of Trinity College, Oxford in January 1918 (4th from right in 1st seated row). He was seriously wounded in battle, hospitalised, and returned to Australia in 1919. He later settled in Ferntree Gully and died in 1968.