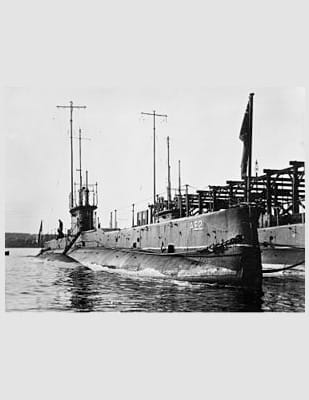 William Jenkins was born in England in October 1889. It is not established when he travelled to Australia but he joined the Royal Australian Navy as a stoker 2 class in August 1912 and was drafted to HMAS Cerberus on that date.

He soon joined the HMAS Encounter in November 1912 and sailed to the London Depot, arriving on 1 January 1913 where he trained as a stoker, and joined the crew of the submarine AE2, which had been launched on 18 June 1913 and commissioned at Portsmouth on 28 February 1914. He sailed for Australia on 2 March 1914 and arrived in Sydney on 23 May 1914.

After service in the Pacific submarine AE 2 sailed for England on New Year’s Eve 1914. It was diverted to the Dardanelles and on 25 April 1915 the AE2 made the passage through the Dardanelles and into the sea of Marmara. The submarine was scuttled after being damaged by a Turkish gunboat on 30th April.

William became a Prisoner of War along with the rest of the crew and was imprisoned in various POW camps in Turkey. Whilst he was a POW he was held in camps at Afion, Kara Hissar, and Belemedik. He was released in late 1918 and returned to London in December 1918 via Alexandria.

For his World War I service he was paid £29. His share of the Naval bounty money was £33 and he received £9/12s/4d. compensation for clothing lost in submarine AE2.

He returned to Australia in March 1919 and discharged on 20 October 1919. He settled in East Malvern.