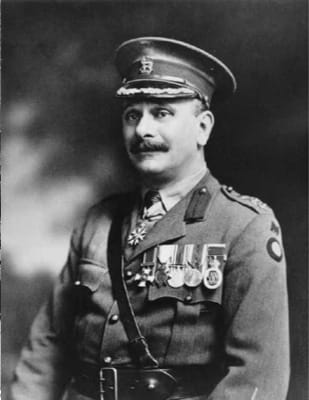 Harold Edward Cohen, Was an outstanding member of Caulfield Sub-branch as well as a great Australian. Born in 1881 and educated at Xavier College he had already been an officer in the CMF for 14 years when he enlisted in the AIF. Initially posted to Egypt in December 1915, he was transferred to France where he held a number of command positions at the front.  He was twice Mentioned in Dispatches (MID) and awarded a Distinguished Service Order (DSO) in 1917, he was wounded in action, and he was made a Companion of the Order of St Michael and St John (CMG) by the King in Jan 1918.

Upon his return to Australia in June 1919, he resumed his legal practice, and (in no particular order) joined Caulfield RSL as a member; became a founding member, and first President of the Legacy Club. As a friend of Stan Savige, he also became involved with the Scouting movement and served as Chief Commissioner. His name can be found on many pieces of legislation pertained to Soldiers and Widows welfare. Not content with those posts, he resumed his membership of the CMF between 1921 and 1927. He was Elected as an Upper House member (MLC) of the Victorian Parliament in 1929. He transferred to the lower house as the member for Caulfield in 1935 until 1943. He also had racehorses and won the Caulfield Cup with “Northwind” in 1936.

Not content to rest on his Laurels he returned to active service as Director of Amenities and Adjutant General with the Land Army in WW2. He was also Mentioned in Dispatches.

Quick fact:  Cohen was the first Jewish boy to attend Xavier College and was chairman of the Jewish Returned and Ex-Servicemen's Association from 1937 to 1946.