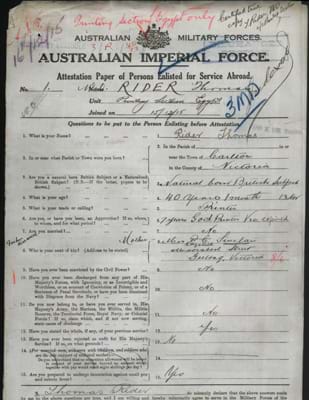 Thomas Rider. During WW1 Each Section of the AIF allocated its own Service Numbers. Tom’s service number was One, (1).

He and six others printers and compositors were mobilised as the Printing Section to accompany the Headquarters unit to Egypt. Having joined on the 15 Dec 1915, they sailed on board HMAT A32 Themistocles on 25 January 1916. He was assigned the rank of Warrant Officer. It seems that the Printing section was not required, or priorities changed as the whole unit was returned to Australia on the 10 July 1916. At the time he was 40 yrs. old.

He eventually became the Head printer for the Victorian Govt. His name appears on the bottom of many Government Documents of the period. He remained a member until his death in 1950.

Anecdotally he is the reason why the Sub-branch produced very good Annual Report booklets and such good membership registers.

Quick fact:  Rider is one of 2 CRSL members with a Service number of 1 - the other is Arthur Joseph Clements of the 1st Survey Corps